Lets depart from the current world of fast-fashion for a moment and time travel back to explore the glorious traditions of Indian Royalty. India is well renown for its budding jewellery industry that dates back to centuries, every pocket of the country keenly produces a specialised technique that is the pinnacle of craftsmanship- be it the Kundan from Rajasthan or the Jadau from Gujarat. A fact less known is that Western Jewellery Houses found ardent clients in Indian Royalty that led to the creation of the most breathtaking pieces in history. We scoured for the most enchanting anecdotes that will leave you truly wide-eyed with major accessory envy. 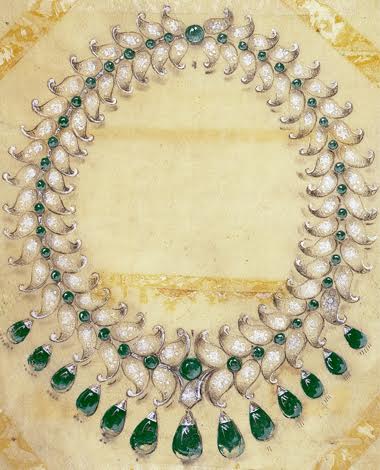 Maharani Sita Devi was that mystical character of what Bollywood cinema is made of. Defying the high hand of tradition she wedded her second husband- Pratap Singh Gaekwad of Baroda and even converted to Islam to nullify her first marriage to a wealthy zamindar. The Maharaja was considered to be the 8th richest man in the world at that time and the duo spent a lavish lifestyle which included trips to New York where they spent millions of dollars and even purchased a sprawling mansion in Monte Carlo. A woman of unparalleled taste, the Maharani had a penchant for chiffon sarees crafted in Paris, fur-trimmed shoes and imported cars. She was a familiar sight of decadence at the Waldorf Astoria and Dorchester in London, her neck and ears dripping with diamonds. Parisian jewellers Van Cleef & Arpels were her favourite and she was affectionately referred to as ‘Mrs Brown’ because of her dusky skin tone by the staff. The French jewellers created numerous masterpieces for the queen which included the Hindu necklace, the most spectacular of them all however was the Baroda necklace- commissioned in 1949 and designed by Jacques Arpel himself, it consists of 13 pear-shaped Colombian emeralds – 154 carats in total – suspended from diamonds set in the shape of a lotus flower. All the gems were supplied by the Maharani and belonged to the Baroda Crown Jewels. Sita Devi’s reckless spending eventually led to solitary latter years and financial problems which urged her to auction off her most coveted pieces of jewellery.

2. The Patiala Necklace by Cartier 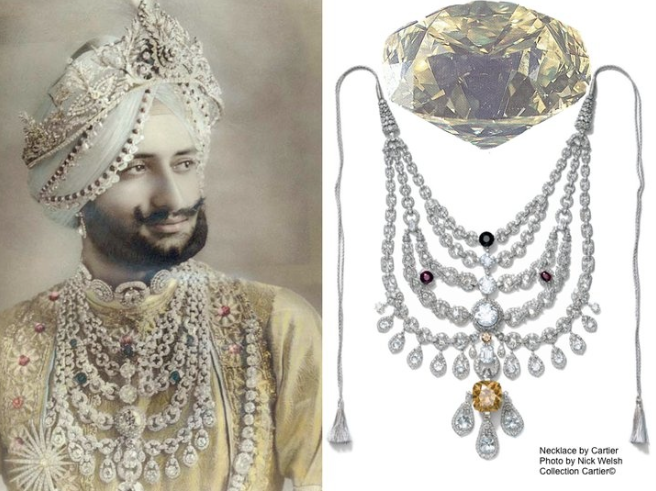 It took 3 years and 2,930 diamonds to create one of the most iconic diamond necklaces of all times, no kidding. In 1926, the workshop of French jewellery house- Cartier received a largish trunk of jewels from Maharaja Bhupinder Singh of Patiala, amongst them was the mythical DeBeers diamond, the seventh largest diamond in the world, mined in South Africa. The order? A ceremonial necklace fit for a king. The ingredients- a 234.6-carat yellow diamond, roughly the size of a golf ball, seven other diamonds ranging from 18 to 73 carats, Burmese rubies, two of which weighed 29.58 carats, all expertly strung in 5 rows of diamond encrusted platinum. Fit for a kingdom, I’ll say. The necklace sparked much controversy when it mysteriously disappeared from the king’s treasury in 1948. At an estimated value of $25 million, Bhupinder Singh’s son- Maharaja Yadavindra Singh was the last king to wear it. In 1982, the DeBeers diamond appeared at a Sotheby’s auction in Geneva where it was sold for a reported $3.16 million. The necklace itself was discovered by Eric.
Nassabaum- a representative of Cartier who found its remnants in an antique shop in London. The necklace had been stripped off the jewels to just the platinum chains and Cartier chose to restore it over a period of two years, replacing the original jewels with cubic zirconia and synthetic diamonds. The repaired necklace was proudly displayed at the Cartier store on 5th Avenue in Newyork for all the public’s lustful glances.

3. The Jodhpur Necklace by Boucheron 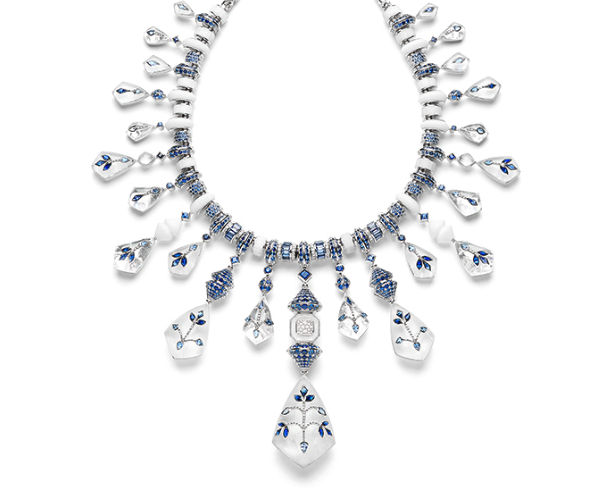 Moving onto more contemporary times, Boucheron-the famous maison in Paris’s historical Place Vendome carries forward its age old legacy with Indian Royalty. Back in the 1800, the maison found loyal customers in the Maharaja of Kapurthala as well as the Maharaja of Patiala under whose wishes they created the most stunning pieces that have become synonymous with the house’s design ideology. In an ode to the beautiful city of Jodhpur and under the patronage of its current king- Maharaja Gaj Singh II, the Maison has created a special ‘Blue de Jodhpur’ collection. The tour de force of this line up is the reversible Jodhpur necklace, inspired by the blue and white architecture of the city, one side of the necklace is encrusted with diamonds and sapphires. The reverse side consists of marble from the Markana quarries of Jodhpur that produced the same marble as used to build the Taj Mahal. The Maharaja, a jewellery enthusiast has collaborated with the maison’s creative director Claire Choisne, her understand the DNA of Jodhpur. The necklace is reminiscent of the Mughal era, it contains floral motifs set in white gold. The collection is a perfect embodiment of the city’s heritage with a modern use of technology.

Illustration: (@angie_crabtree) painted her first diamond at 5 feet tall in 2012 for a gallery exhibition about materialism and luxury. She fell in love with their symmetrical patterns and began every shape, one by one.

Words: Tanya Mehta is a Mumbai-based fashion writer. She loves a good cafe latte, film noir and the prospect of teleportation.